Next time when you hear your name try to imagine the energy in it… how come you are so sure may ask ? Well many don’t think of it but sound is energy and so is the sound of your name… according to the bible the universe was created by God sound..but even if you don’t believe such things listen to this, let’s go down to earth with every day problem we all have now …

What if you never had to plug in your cell phone or laptop again? That’s the promise of uBeam, which charges electronics using sound waves rather than wall sockets. Though Meredith Perry isn’t saying when it might be available or how much it would cost, she has raised $1.7 million, already in this last month, Perry’s invention: a transmitter that can recharge wireless devices using ultrasonic waves. It’s like Wi-Fi, she says, except instead of a wireless Internet connection, her’s transmits power over the air.

“What happens is, the ultrasound, which vibrates the air, vibrates what’s called a piezoelectric transducer,” she says. “And what happens is the ultrasound will vibrate the piezocrystals, and the crystals will move back and forth, and that will generate an electrical current.”

“Sound is vibration in the air.”

Sound frequency “is basically how many cycles per second air is being pushed through a space, We have little hairs in our ears that vibrate in response to sound. We interpret that change in air pressure as sound. But sound is something that exists outside of our head. Literally, it’s just air particles moving in an arranged fashion.

Sound energy is a form of energy associated with the vibrationor disturbance of matter. The SI unit of sound energy is the joule(J). Sound is a mechanical wave and as such consists physically in oscillatory elastic compression and in oscillatory displacement of a fluid. Therefore, the medium acts as storage for bothpotential and kinetic energy as well

Consequently, the sound energy in a volume of interest is defined as the sum of the potential and kinetic energy densitiesintegrated over that volume:

Sound is a longitudinal mechanical wave propagating through gases, liquids and solid materials. Sound waves travel as a sequence of compressions and rarefactions with associated pressure variations. The figure below illustrates molecules in a gas through which the sound propagates. A microphone placed at a fixed point converts pressure changes caused by the sound, to a time dependent voltage. The displacement s is proportional to the pressure difference or sound pressure δp

The human DNA  is directly affected by the sound waves. Russian scientific research, presents evidence of a completely new type of medicine that can affect the DNA and programmatic again by words and frequencies.

Only 10% of our DNA is being used for building proteins. The other 90% are considered “junk DNA.” Russian researchers, however, convinced that nature was not dumb, and began to venture to explore those 90% of “junk DNA”. The results of their findings and conclusions are simply a revolution! According to them, our DNA is not only responsible for the construction of our body but also serves as data storage and communication. Russian researchers have found that the genetic code, especially in the 90% most likely useless, follows the same rules as all our human languages. To this end they compared the rules of syntax (the way the words are put together to form phrases and sentences), semantics (the study of meaning in language) and the basic rules of grammar. They found that the bases of our DNA follow a regular grammar just like our languages. So human languages ​​did not appear in the case, but are a reflection of our DNA.

The Russian biophysicist and molecular biologist Pjotr ​​Garjajev and his colleagues also explored the vibrational behavior of DNA. The bottom line was :. “Chromosomes function just like computers solitonic / holographic using endogenous DNA laser radiation.” This means that they managed, for example to modulate certain frequency patterns in the laser beam and it influenced the DNA frequency and thus the genetic information itself. Since the basic structure of DNA bases pairs and language (as explained earlier) are of the same structure, no DNA decoding is necessary.One can simply use words and sentences of the human language! It also proved to experiment! DNA material life (in living tissue, not in vitro) always responds Language modulated laser rays and even to radio waves, if the proper frequencies are being used.

Garjajev research group succeeded in proving that with this method chromosomes damaged by x-rays for example can be repaired. They even were captured information patterns of a particular DNA and handed it on top of another, thus reprogramming cells to another genome. ? So they successfully transformed, for example, passes frog salamander embryos simply by transferring the DNA information patterns! In this way, all the information was passed without any side effects or lack of harmonics encountered when cutting out and re-introducing single genes from the DNA. This represents a revolution in world-coup and unbelievable feeling! All this by simply applying vibration and language instead of the cutting process! This experiment points to the immense power of wave genetics, which obviously has a greater influence on the formation of organisms that the biochemical processes of the basic sequences.

As though to confirm the hunch many of us had that our ‘junk’ DNA was anything but disposable, researchers from the Gene and Stem Cell Therapy Program at Sydney’s Centenary Institute have proven that 97 percent of human DNA programs or encodes proteins in our bodies. One of the researchers involved in this study said, “this discovery, involving what was previously referred to as “junk,” opens up a new level of gene expression control . . .”

This also means there are multiple modalities that mainstream science has yet to give a nod to, which just might re-train or reprogram our DNA — even cells which have become cancerous or are mutilated by the onslaught of toxins in our environment and negative emotional baggage which has been proven to have an undesirable impact on health. Many people have compared human DNA to the Internet. It communicates immense amounts of information in microcosmically small, but significant ways, mimicking a vast network of information portals, not unlike the billions of websites connected to one another all over the world. It may account for our intuition, spontaneous healing, and a number of other phenomena that mainstream science is just beginning to understand.

Esoteric and spiritual teachers knew that our bodies are programmed by language, words and thought. It is now scientifically proven and explained. Of course the frequency has to be correct. Which is why not everybody is equally successful to do it is always the same strength. The individual must work on the inner processes and maturity in order to establish a conscious communication with the DNA. Russian researchers work on a method that does not depend on these factors, but found sound waves always work, provided one of the users at the right frequency.

The flower of life is represented by circles overlaying one another in a manner that creates nodes where they intersect. The geometrical pattern follows something which we have come to know as the “Golden Ratio”, which plays a part in the Fibonacci Sequence. This pattern can be found in various parts of life, most abundantly in nature; in fact, it has even come to be referred to as nature’s numbering system. Some examples of where this can be found are florets in a flower, scales of a pineapple, the spiral and leaf count in a rose, and a beehive. Deeper yet, the exact pattern of the flower of life can be seen in the way a 13 strand DNA is formed by looking at the cross section (see below). 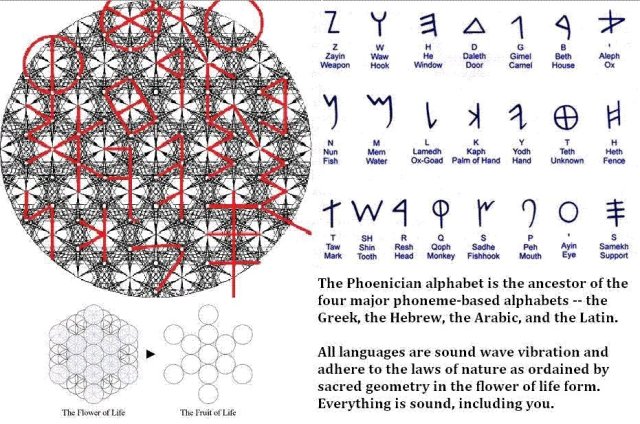 The first letter of your name (according to the sound you say it, for example in the name Christ the first letter isn’t CH but K ), tell something about you. Check it out and give your feedback. Is it fit you or not?

if you have facebook you can see what others think of it and give your own oppinion about this here
https://www.facebook.com/guideangels/posts/376034985915469