What is the connection between the soul , the multiple worlds theory and quantum computer?

The multiple universes theory is controversial, but some well-known scientists, physicists and astrophysicists tend to agree with the existence of parallel worlds which raises the possibility of multiple universes. Multiverse multi (multi-universe) is the so-called scientific concept, which they believe.

The first such possibility was raised by science fiction writer Jules declared in 1895 in his story “The door in the wall”. After 62 years, this idea was developed by Hugh Everett his graduate thesis at Princeton University. He claims that at any moment the universe is divided into numerous similar cases and the next, universes “newborn” and in some of these world you can be present.

According to Everett; When we make some choices, immediately one universe splits into two with different versions of the results.

In 1980, Andrei Linde, a scientist in Lebedev Institute of Physics, developed the theory of multiple universes. He is currently a professor at Stanford University.

Linda explained: space consists of many areas of inflation, led to similar areas, and these, in turn, produce many more fields, and so on to infinity. Universes, are spaced. They are not aware of it. But they represent parts of the physical universe.

The fact that our universe is not alone supported by the data obtained from the Hubble Telescope. Scientists have created the most accurate map of the cosmic background radiation, which remained since the creation of our universe. They also found that the universe has a lot of dark niches represented by several large holes and gaps.

Theoretical physicist Laura Mersini-Houghton from the University of North Carolina with her colleagues argues deviations of the cosmic background radiation exist due to the fact that our universe is influenced by other locations exists nearby. Holes and gaps are a direct result of the attacks on us by the neighboring universes.

The Quantum world and the Soul connection 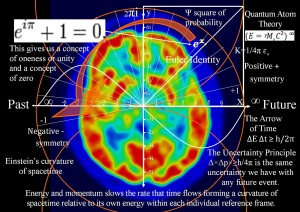 So, there are plenty of other locations where our soul can pass after death, according to the theory of neo biocentrism. But does the soul exist?

Professor Stuart Hameroff of the University of Arizona has no doubts about the existence of an eternal soul. He recently announced that he has found evidence proving that consciousness exist after the physical death of the body.

According to Hameroff, the human brain is a perfect quantum computer and soul or consciousness is simply information stored at the quantum level. It can be passed, after the death of the body; Quantum information represented by the consciousness merges with our universe where there is no time limit. The Biocentrism expert – Lanza proves that the soul travels to a different universe.

Sir Roger Penrose, a famous British physicist and expert in Mathematics from Oxford, supports this theory, and is also found traces of contact with other universes. Together, scientists who develop the quantum theory explains the phenomenon of consciousness. They believe they have found the carriers of consciousness, the elements accumulate over a lifetime, and after the death of the body are “drain” the mind elsewhere. These elements are located in protein-based microtubules (neural microtubules), which had previously been attributed to a simple role of strengthening communication and transport in the living cell. Based on their structure, microtubules are best suited to function as carriers of quantum properties within the brain. This is mainly because they are able to maintain the quantum states for a long time, which means that they can function as elements of a quantum computer.

2 thoughts on “The soul , multiple universes and quantum computer”